Tha Slayer is all set to drop his promised Ep – Prologue. Earlier this year, on an interview from Floric Entertainment, the rapper promised dropping this Ep and an announcement was made on the 11th of July that the EP will drop in all major stores on the 24th of July. 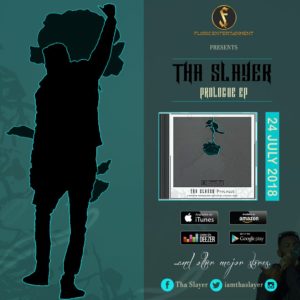 No mention was made with regards to any of the songs featured of the Prologue Ep being released prior to official release of project, however – Tha Slayer recently dropped a free track on a MajorHitz (Danish music producer) instrumental titled Drugged Out, something worth a write about.

Listen to drugged out below…

If this is anything like the Ep then let us be the first to make mention to the Zimbabwean entertainment scene in particular (Tha Slayer’s birth country) and the world in general of the new season we are about to go through.

The Prologue Ep should be your highly anticipated project for July 2018. 2 thoughts on “Tha Slayer – Drugged Out”